Things to do in Boa Vista 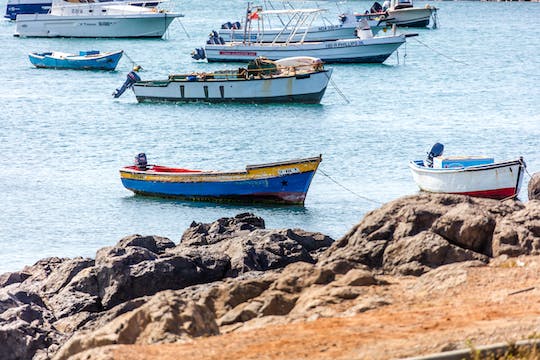 With its blend of African, Brazilian and European influences, Cape Verde's unique culture is one to experience. First up is a trip to the hilltop Fatima chapel – a remote sanctuary with incredible views over the Atlantic. Then, we'll explore the island's past in the Museum of Naufràgos. Admire a collection of exhibits on the history, art and culture of the Cape Verdean people. Next, head to Sal Rei for a guided tour. At the markets, you'll find handmade jewellery, clothing and fresh produce. Take a walk along Praia de Diante beach before trying Cape Verdean treats at Sodade House of Culture. Finally, there'll be free time to explore. 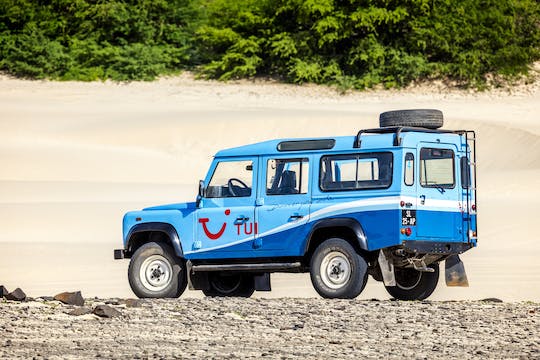 A chance to delve into some of the Boa Vista's top spots. This morning-long adventure kicks off with a visit to the 19th-century church in Rabil – Boa Vista's second-largest town. Then it's off to a ceramic factory to see how local pottery is crafted. You'll also get to taste cachupa, Cape Verde's national dish. Next, you'll zoom through the dusty landscape of the Viana desert. In Povoação Velha, you can wander its rustic streets before setting off for the 18 km-long Santa Monica beach. 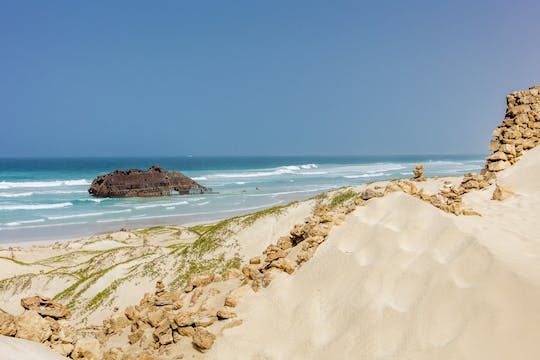 There's no shortage of great views in Boa Vista, and this 4x4 tour shows you just how picturesque it is. We'll kick off in style as we travel by 4x4 to Rabil to try some local delicacies – it's a great way to start your adventure. Next, it's on to the shipwreck at Cabo Santa Maria, where a Spanish cargo ship ran aground. In Fundo das Figueiras you'll stop for a break and a typical island lunch in a quaint local restaurant, after which you'll be able to stroll along the flower-lined streets and past pastel-coloured houses. Rounding off the day is a visit to a turtle centre for an insight into these fascinating creatures. 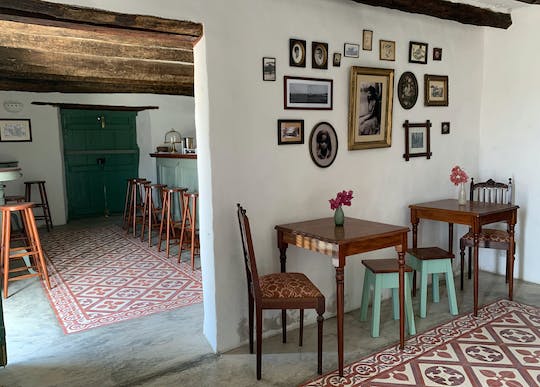 Shine the spotlight on all-things Cape Verdean with an evening out at the Sodade House of Culture. You'll take a step back in time at the House of Memory, taste locally-produced dishes and delicacies with a three-course dinner as well as listen to authentic live music from a local artist. You'll kick off the night with a welcome drink crafted from all-local ingredients. Then, head upstairs to the House of Memory where you'll learn all about the history of the Portuguese colonial era with the aid of an audio guide and see how Cape Verdean's once lived.When you've worked up an appetite, you'll sit down to a three-course meal. Try some of the nation's most famous dishes and sweet treats whilst you listen to a backdrop of traditional live music performed by a local artist. 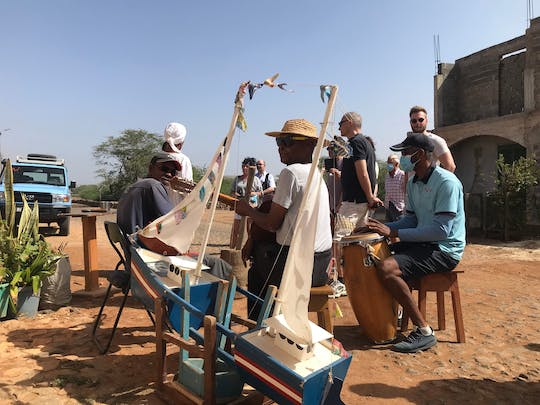 It's all about immersing yourself in Cape Verde's colourful local culture on this 4x4 tour. You'll begin your Boa Vista experience in Cabeça dos Tarafes. There'll be a warm welcome by the villagers, who'll invite you to watch traditional dances and live music. Then, it's over to the recently restored lighthouse at Morro Negro to hear its history. Next stop will be the golden arch of beach at Porto Ferreira, a protected turtle-nesting site where you can dive in for a swim. Rounding off the day is a visit to a family home to see how genuine catchupa stew is made before tucking into the Cape Verde national dish. 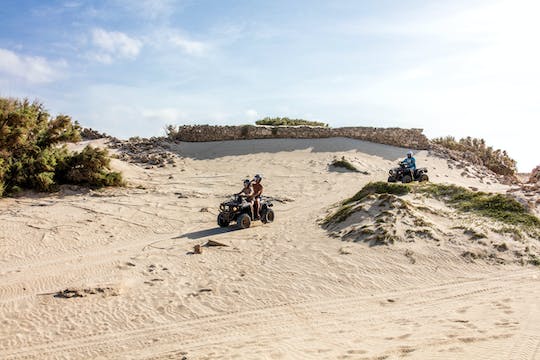 Off-road adventure is the name of the game on this action-packed excursion. Spend four adrenaline-pumping hours carving up the sands and exploring the trails of Boa Vista's stunning south coast. Choose whether you want your own quad or whether you're happier to be a passenger. You'll be fully instructed in how to safely ride these very powerful machines, before a quick test drive. Then we'll speed off to the village of Povoação Velha, where you can have a look around. Next, jump back in your quads for a drive over to Santa Monica beach. You'll also stop at Varandinha before heading back. 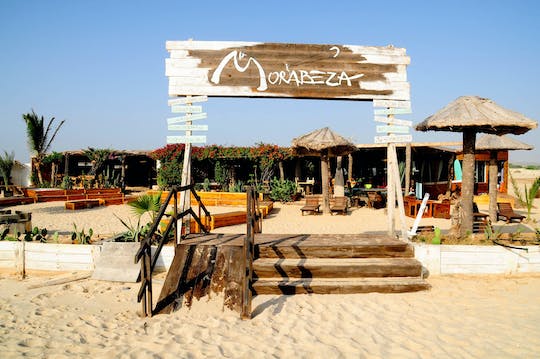 The west coast of Boa Vista usually provides stunning sunsets across the South Atlantic. Take one in with your special someone over a delicious dinner, followed by some live drumming and funky tunes on the beach. You'll be whisked off to the island-renowned Morabeza Beach Club well before the sun begins its descent over the water. As the light dims, a bonfire is lit and African drummers start to provide a soundtrack of infectious beats. Then it's time to sit down and enjoy a delicious buffet dinner, plus a drink to wash it all down. Cape Verde is a hotspot for whale activity during March and April, being one of just two breeding sites in the north Atlantic. And this half-day cruise takes you into the waters around the island to spot these majestic creatures in their natural habitat – all with the help of an on-board marine biologist. Humpback whales come up for air for minutes at a time, before raising their enormous dorsal fins out of the water as they dive back down to the depths. If you're really lucky, you might see one launch themselves into the air, before crashing back onto the surface with an almighty splash. 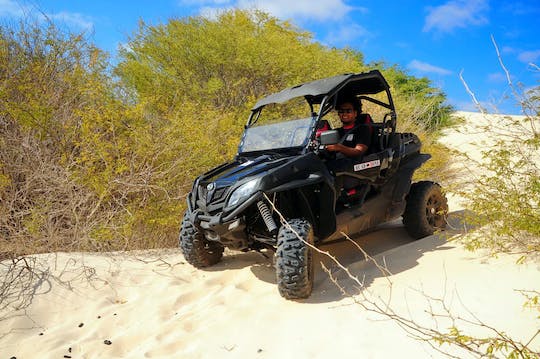 Inject your holiday with a healthy dose of adrenaline-pumping adventure with this dirt buggy tour. Hop in your powerful off-road buggy and after a quick safety briefing, you'll be ready to ride. Set off down Cape Verde's rugged trails and you'll zig-zag your way from the Chaves chimney – the towering smoke stack of an old ceramics factory – and rumble alongside epic views of the Atlantic Ocean. Revving along the coast, you'll take a quick break from the action at the Fatima Church before hopping back in the buggies over rolling sand dunes to find the perfect spot for a photo over Sal Rei Bay. 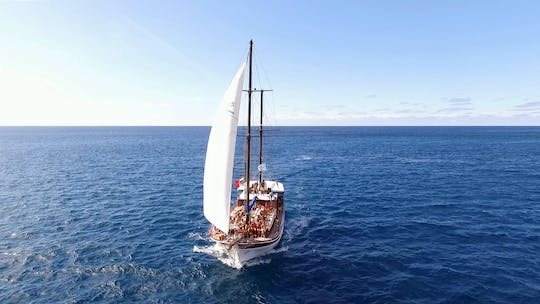 This relaxing adults-only boat trip will give you a new perspective on Boa Vista while you enjoy all the little luxuries that make being on holidays so special. From the moment you board our boat, you'll feel the difference with a welcome drink setting the mood. Glide on the waters of Sal Rei bay and relax as you take in Boa Vista's beautiful coastline. Your skipper will sail to Praia de Chaves beach and around the uninhabited islet of Sal Rei. Snacks, water, soft drinks, local beer and wine are all included. 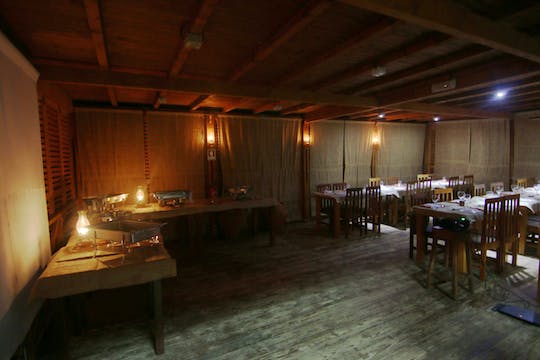 For a truly celestial holiday experience, it's hard to beat this evening dinner in Boa Vista's Viana desert. On arrival at the Viana Club, you'll be handed a welcome drink before listening in to a briefing on what to expect of the evening. Dinner will then be ready - a buffet of traditional Cape Verdean dishes for you to feast on. And after eating, you'll head outside for an exhilarating view of the heavens. Gaze into the stars and planets with your naked eyes and with the help of telescopes. The kids are also well looked after as there are some gravity-centred activities for them to take part in. 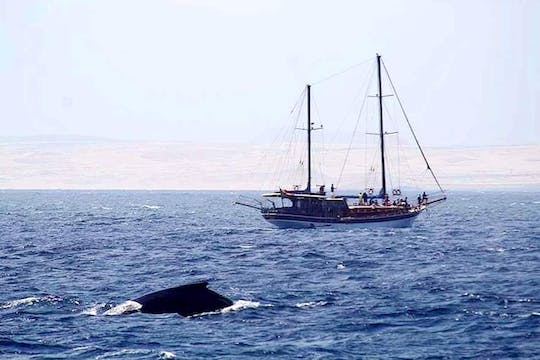 Get the lowdown on whales and their habits from an on-board marine biologist during this whale watching tour in a traditional caicco boat. You'll be picked up at your hotel and head to the pier, ready to board the dinghy to take you to the Gelidonya caicco. Relax with a welcome drink and fresh fruit, while the biologist briefs you before you head off in search of pods of whales. Prepare to be dazzled by expert explanations, sound recordings, hydrophone demonstrations and of course, whale watching. Tuck into finger food and enjoy waiter service until it's time to head back to land.

As they named it ‘good view’, it’s likely that the Portuguese explorers who first set sight on Boa Vista were smitten by their find. Fast forward five centuries, and the island hasn’t changed much looks-wise – the silk-smooth beaches and Mars-like deserts are pretty much intact. As a bonus, there are a handful of pit stop-worthy towns and villages on the island. Must-sees include the Viana desert, which is shielded by the oasis of the River Rabil basin, the Atalanta beach shipwreck, the village of Fundo das Figueiras and Sal Rei, the capital.

Top six things to do in Boa Vista

The Viana desert is one of the top places to visit on Boa Vista. Its wavy dunes are hemmed in by the bright-green basin of the River Rabil to the west and the rock-strewn Amador to the east. And among the best activities on the island is a safari tour. Whether you explore this made-for-off-roading desert by 4x4, buggy or quad bike is up to you – whichever activity you choose, it’ll get your adrenaline flowing.

As capitals go, Sal Rei is on the small side. But its mix of African, Portuguese and Brazilian influences gives it an exotic groove. One of the most popular attractions is the ocean-view Fatima chapel. Then there’s the beach scene – Cabral and Estoril boast long stretches of sand, and Diante features colourful fishing boats anchored off the pier. They’re all definitely worth a daytrip.

Although it’s been of Boa Vista’s most iconic landmarks for more than 50 years, the Cabo Santa Maria shipwreck won’t be around for ever, as the Atlantic’s waves are slowly eroding it. So, make sure you pay Atalanta beach a visit when you’re on the island. It’s a fixture on the itineraries of most excursions taking in northern Boa Vista, especially off-road safaris.

The south of Boa Vista’s definitely a magnet for beachgoers, because of the almost-endless Santa Monica beach. But it also has two of the most interesting villages on the island. There’s the abandoned Curral Velho, where you can poke around the crumbling homes and take photos of its amazing beach and salt pan. The other must-visit southern village is Povoação Velha. It’s the oldest settlement on the island and lies in the shadow of a craggy hill. Many popular Boa Vista excursions visit both villages.

Fundo das Figueiras might be the prettiest village on Boa Vista. Thanks to the stream that flows through it, it has more vegetation than other settlements on the island. It’s famed for its flowers and tree-lined cobblestone streets fringed with colourful houses. The oh-so-pretty whitewashed parish church also makes for a great selfie background.

Catchupa is Cape Verde’s national dish, so it’s no surprise that every island in the archipelago claims that it serves up the best. Boa Vista’s no exception. If you want to try genuine homemade catchupa stew – made of meat, beans, vegetables and spices – book an excursion including a catchupa cooking demonstration in a local home followed by a slap-up lunch. And, for dinner, check out the Morabeza Beach Club, which is famed for its sunset dinners, including drummers, bonfires and the works.