Paphos
Home
/
Cyprus
/
Things to do in Paphos

Things to do in Paphos Cyprus is all rolling hills housing pretty villages. You'll dive straight into ancient history at one of the most impressive archaeological sites in Cyprus, Kourion. Visit the Roman baths and amble into the site's centrepiece, the Greco-Roman theatre. Kolossi Castle is the next stop. Then, we'll head to the mountain-fringed village of Omodos, where you'll have some free time to wander around. Next, you'll head to the winery to learn all about and taste one of the island's most famous wines. Tasty meze, live music and dancing – this trip has all the ingredients for a right old Cypriot night. We'll kick off with a short drive to Aphrodite's Rock. Watch the sun sink over this mythical sea stack and burnish the sky while sipping on a sparkling wine. You'll then get the chance to devour just about every typically Cypriot dish you could possibly wish for. The emphasis is on pure ingredients and traditional meze, washed down with local wines. And once your belly is full, it's time to let your hair down. Folk-infused music and songs will have you boogying and shaking on the dancefloor. Cyprus is all rolling hills dotted with pretty villages. On this small group tour, you'll see where a legend was born, visit the ruins of Kourion, venture to the village of Omodos and cap off the day with a wine tasting. Eva, one of our local guides, says of this excursion, ‘You'll wander through layers of history, culture and mythology, and learn about Aphrodite. The rituals connected with her as well as the plants and seashells associated with her.'You'll dive straight into the past at Aphrodite's Beach to see Petra tou Romiou, a sea stack where, according to legend, love goddess Aphrodite was born. We keep theme ancient at Kourion, one of the most impressive archaeological sites in Cyprus. Visit the Roman baths and amble into the site's centrepiece, the Greco-Roman theatre. Concerts are still held to this day. The 15th-century Kolossi Castle is up next. This Crusader-built fortress is surrounded by blooming plants.Then, we'll head to mountain-fringed Omodos, where you'll have free time to wander around skinny cobbled streets lined with Byzantine buildings. It's Eva's favourite village. She says, ‘The charm of the stone houses, the tranquillity and peacefulness. It's as if it has sprung from a fairytale.' You'll enjoy a local lunch in a family-run taverna and drop into a ‘kafeneio', where, says Eva, ‘locals meet for philosophical discussions, political arguments and a bit of gossip'. Plus, there's a winery tour, where you'll learn all about sweet commandaria wine.

The journey into the Troodos Mountains is a journey to another Cyprus. Rustic stone villages dot verdant valleys and traditional ways of life still hold sway. You'll encounter beautiful landscapes which contrast the coast and stop for a coffee with some tasty local treats. Eventually you'll reach the star of the show, the Kykkos Monastery, whose interior is richly decorated with golden icons and frescoes. Afterwards, we'll arrive in Omodos to wander the narrow Byzantine streets of this village nestled amid vineyards. 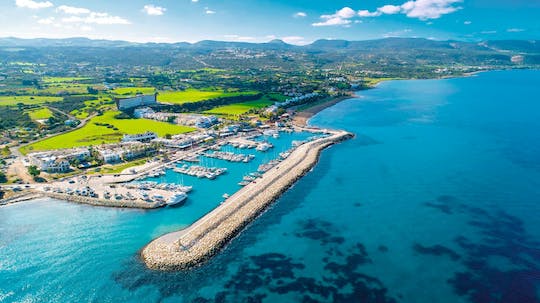 Cheese making, wine tasting and a sunset cruise on the Mediterranean Sea – this trip really gets those holiday vibes going. First up, we'll take you to Sofia's Traditional House in Letymvou to find out how she makes fresh halloumi and bakes village bread. Follow with a visit to the nearby Makarounas Winery and you'll take a guided tour and enjoy a sampling of their locally produced wines. Then it's a cruise to the Blue Lagoon. Set sail along the coastline so that you can soak up every inch of Cyprus' beauty and catch those last few rays on deck. Then – with luck – an incredible sunset will bring an end to your day.

Cyprus is full of hidden treasures, and you'll explore some of the island's rural highlights on this full day excursion into the Troodos Mountains. First up is Platanisteia – a small village that houses a printmaking museum. After a visit to the Medieval Tzelefos Bridge, there's a stop at a tourist-free taverna for a traditional Cypriot lunch. The highlight of the day is the UNESCO-listed Lampadistis Monastery. Apart from a trio of churches to explore, there are other monastic buildings including cells, auxiliary rooms and an oil press. And before heading back to the resort you'll be able to sample local wine at a Cypriot vineyard. The journey into the Troodos Mountains is a journey to another Cyprus. Rustic stone villages dot verdant valleys and traditional ways of life still hold sway. This full-day small group tour takes you into the spiritual heart of the highlands, the Kykkos Monastery, as well as the village of Omodos.On this adults-only tour, as you go into the depths of the pine-clad Troodos Mountains, you'll encounter beautiful landscapes which contrast the coast. Stop for a coffee break and some tasty local treats and eventually you'll reach the star of the show, the beautiful Kykkos Monastery. Perched on top Mount Kykkos, the monastery's interior is richly decorated and you won't be able to keep your eyes off the golden icons and frescoes.You'll also have some free time to wander around the grounds and enjoy the panoramic views of the mountains. Afterwards, we'll arrive in Omodos to wander the narrow Byzantine streets of this village nestled amid vineyards. 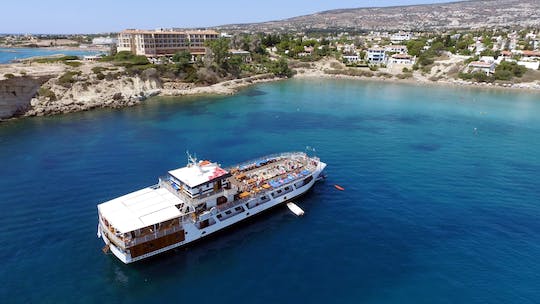 The sunshine and laidback Mediterranean feel of Cyprus are what visitors the world over come to enjoy, and this half-day BBQ cruise lets you do just that. Depending on the weather, we'll sail towards the scenic Coral Bay or Timi Bay where we'll then drop anchor for you to enjoy a delicious freshly cooked BBQ lunch served on the top deck al-fresco. There are all-inclusive local drinks served on the top deck and quality music to complete the summer atmosphere. Freshen-up with a dip in the water and you'll be able to snorkel in the azure Mediterranean water. Get into the holiday groove with a BBQ cruise. 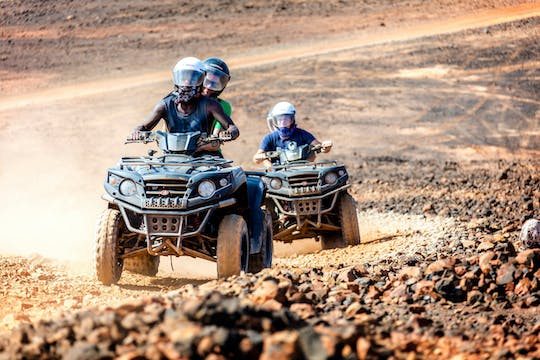 With exclusive access to the wild side of western Cyprus, this guided quad or buggy safari tours will take you to all the key sights. After a full safety briefing, you'll drive in convoy to the famous Paphos Sea Caves and the Chapel of Agios Georgios. Visit a Lara Bay conservation area for the endangered loggerhead sea turtle, followed by a refreshing swim. There are two options available – 3.5 hours or 5 hours. Both offer the Sea Caves, Agios Georgios, Akamas Peninsula and Lara Bay experience. If you choose the 5-hour option, you'll also explore the Adonis Baths, 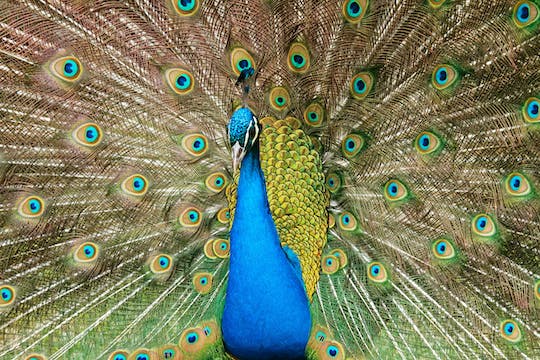 From tigers, lions and giraffes to penguins, monkeys and more, Pafos Zoo is a giant playground where kids can run wild and discover over 500 species of animals. Meet all the residents, big and small, make sure you catch the famous parrot show and take the kids down to the children's farm where they can pet and interact with friendly animals. What's more, the park has all the facilities you'll need including a snack bar, restaurant and souvenir shop. And with transfer from your hotel included, everything's planned for a great family day out. 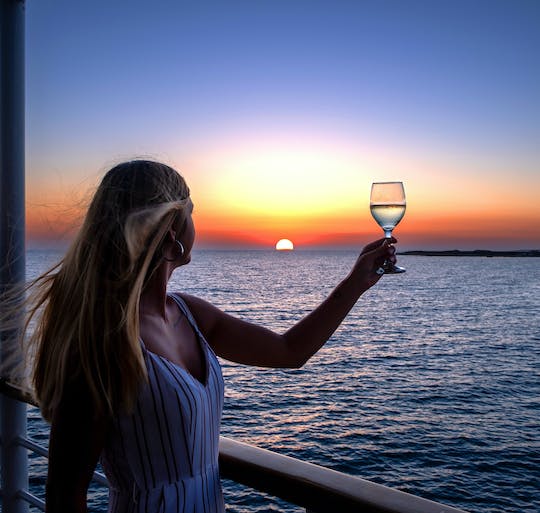 To add a touch of glamour to your holiday, look no further than this evening cruise off the Paphos coast. Set sail off western Cyprus and you'll be escorted to your table where the fun begins. There's music, a live performer and a first-rate dance show to keep you entertained. You'll head towards Geroskipou, where you'll have a tasty three-course buffet dinner on board. Afterwards, make your way to the deck - which doubles as a viewing platform – visiting the bar en route so you can sip a cocktail as you take in the views of the coast. To finish the night with a bang, there's a fireworks display. 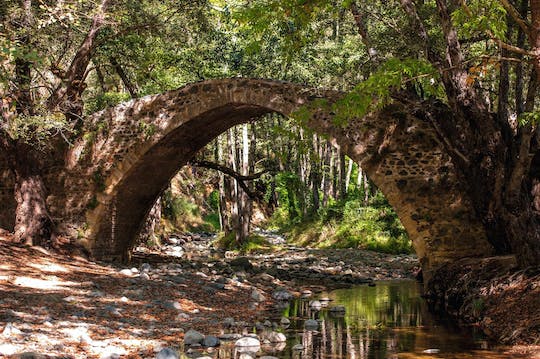 Spanning vast meadows, orchards and thick forests filled with birdlife, the landscapes of the Troodos Mountains are ever-changing. The day starts visiting the photogenic Tzelefos Bridge. Here you can join an optional mini forest hike. Then, stop at a traditional 'kafenion' to taste an authentic Cypriot coffee, before whizzing by a 20m waterfall for some Instaworthy snaps. After lunch, you'll head to the village of Omodos, right in the heart of Limassol's wine growing region. Rounding the day off is a visit to Petra tou Romiou, better known as Aphrodite's Rock, where you can take a paddle or kick back on the sprawling sands.

Scratch beneath the surface in Paphos, and you’ll discover the myths and legends of ancient Greece and Rome. The modern side to this city has tiptoed around the treasures of the past, which are carefully tucked away in a seabound corner. Contemporary action is to be found in the Kato Pafos seafront, lined with bars and shops, and in the Akamas peninsula, a playground for off-roading enthusiasts. The Blue Lagoon, Pafos Zoo and Kykkos Monastery are also prime daytrip destinations.

Top six things to do in Paphos

The jewel in the city’s crown – Paphos Archaeological Park is home to a collection of mesmerising mosaics. You’ll find these at the House of Dionysus, the House of Theseus and the House of Aion. To really get a feel for the history behind these painstakingly excavated and restored treasures, a guided tour is highly recommended. The park’s Roman Odeon and its adjacent lighthouse are also worth checking out. And, the recently restored Crusader castle is eminently Instagrammable.

2. Visit the Tombs of the Kings

The seven Tombs of the Kings are another ancient site worth seeing. Located just two kilometres north of Paphos Archaeological Park, the Roman era tombs’ size and splendour are what makes them stand out from the crowd. Their similarities to tombs in ancient Egypt hint at the trade and cultural links between the two civilisations – they’re well worth a visit.

3. Head to the Akamas Peninsula

If you’re more into wow than highbrow, then the Akamas Peninsula is your playground. It’s got its own classical legends, such as the Baths of Aphrodite, but the real attraction is its rugged landscape. A 4x4 quad or buggy safari will get your adrenaline pumping. Book an organised tour and roam through the peninsula’s wild west while catching sight of attractions such as the Chapel of Agios Georgios and the turtle sanctuary at Lara Bay.

4. Take a boat trip to the Blue Lagoon

The star of the northern coast, the Blue Lagoon, is best reached on a boat trip from Latchi harbour. It goes without saying that the shimmering lagoon is the highlight – but the views from the deck of the cove-dotted coastline, including the mythical Baths of Aphrodite, are well worth the journey alone. Many excursions also feature a Blue Lagoon boat trip in combination with other activities.

This monastery might be a bit of a trek from the coast, but as daytrips go, it’s one of the best excursions in Paphos. The Greek Orthodox Holy, Royal and Stavropegic Monastery of Kykkos – to give it its full name – is famed for its religious icons, but the journey there is an experience in itself. You’ll discover why as you climb through the pine-clad Troodos Mountains, passing rustic stone villages along the way.

Ever popular with families, Pafos Zoo is a bit of an unexpected find in this corner of Cyprus. Home to more 1,200 creatures, including giraffes, tigers, reptiles and even penguins, expect a lot of excited finger-pointing from the kids.